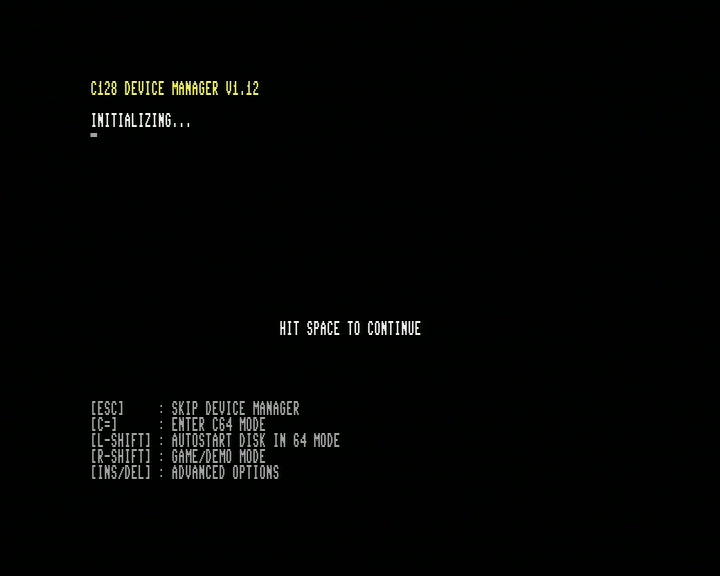 If you are using a Commodore 128 together with an Ultimate II cartridge, you probably encountered some oddities for 128 mode, and for 128 D users, you probably found the internal drive gets in the way at times. The Commodore 128 device manager rom addresses those issues, and provides some nice extra features exclusively for your Commodore 128.

With exception of the advanced options and game/demo mode device selection menus, all menus will time out after approx 3 seconds, you can use the space bar to cancel this timeout. You can also press space to pause the startup screen.

Why is this usefull?

Let's assume a Commodore 128D with built-in 1571, and an UII+ with drive a enabled. Both devices are set to ID 8.
This would cause a device id conflict, but when using the device manager, this will be detected, and you can decide on how it resolves this.
This means you can select which drive will actually be at id 8 at each boot, and can optionally disable the conflicting drive, or move it to an alternative id.
Video demonstrating selecting a device to use for id 8

When you power on or reset your c128, and just let the device manager do its thing, it will detect conflicts between uII drives and physical drives, and will default to changing the device id of the physical drive. Before doing so, it will give you a few seconds to select an alternative action (press space to cancel the timeout). So lets say you want to run some software from UII drive a, and want to have your 1571 available for reading/writing physical floppy disks (lets say.. to run a copy program). You'd use either option 1 or option 3 (default) from the conflict resolution menu, depending on which of the 2 drives you want to be drive 8.

Many demos and games only want to run with one single device enabled. To run those, use game/demo mode. It will let you select which of the available drives to use, and will try to mute all other drives. If it can't mute the drive, it will ask you to disable it or power it off. It will also check for printers.
Video demonstrating the use of game/demo mode to start a C64 demo.

All this works without having to change ID switches, modify your 128D to add drive enable and ID switches etc.

How does this work?

Read the documentation and tech notes 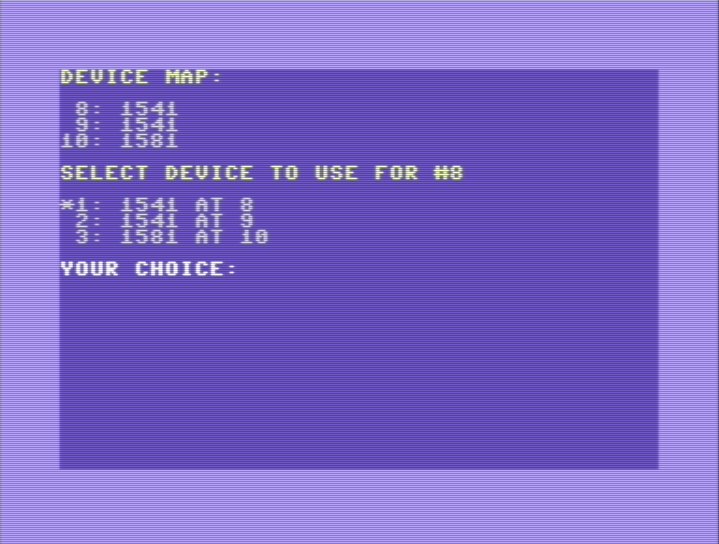 Gideon Zweijtzer for creating the 1541 Ultimate cartridges.
Scott Hutter for the firmware change that enables drive management on the UII cartridges.
Krill for coming up with this approach for muting 154x/157x devices.
Everyone who helped testing and debugging.